Nimrud, the War and the Antiquities Market
— Samuel M. Paley
An account of the war damage to the important Iraqi archaeological site, Nimrud, where many precious jewels and vessels have been found in the past and where major archaeological sites and palaces are still located.


Report on the First UNESCO Cultural Heritage Assessment—Mission to Baghdad, May 16-20, 2003
— John Malcolm Russell
A first-hand account by another noted Mesopotamian archaeologist of the UNESCO mission to Iraq organized in the immediate aftermath of the Iraq Museum looting in an effort to assess the damage.


Cultural Tragedy in Iraq: A Report on the Looting of Museums, Archives, and Sites
— McGuire Gibson
This article, by a noted Mesopotamian archaeologist, gives an overview of the looting of the Iraq National Museum in Baghdad and other sites that occurred on April 10-12, 2003. Author discusses some prime artifacts that were safely stored prior to the looting but also many great works that were lost. Also discusses important archaeological sites in the area that are being destroyed.


News and Updates: IFAR Flashback
— Sharon Flescher
From IFAR Publications: 30 years Ago, 20 Years Ago, 10 years Ago and 5 Years Ago.


News and Updates: Austria Seeks Review by Supreme Court in Klimt Case
— Samuel Butts
The Republic of Austria has filed a petition asking the Supreme Court to hear its case after a three-judge panel of the Ninth Circuit Court of Appeals in California ruled that Maria Altmann could sue Austria in California court regarding six Gustav Klimt paintings.


News and Updates: Who Owns the Works Nationalized by Lenin?
— Sharon Flescher
Andre Marc Delocque-Fourcaud has filed a lawsuit against the Los Angeles County Museum of Art. His grandfather, Sergei Shchukin was the owner of a great collection of modern French art appropriated by Lenin in 1918. Twenty-five of the paintings on temporary exhibit at LACMA once belonged to Shchukin.


News and Updates: Accused Dali Thieves Charged
— Sharon Flescher
Two Assistant Deputy Wardens and two Corrections Officers have been charged in the theft of Dali’s Christ on the Cross, which was taken from Riker’s Island Men’s Correctional Facility.


News and Updates: Art Loss in Iraq
— Sharon Flescher
Brief description of the recent losses of art due to the military situation in Iraq (the looting of the Iraq National Museum, and the burning of the National Library), as an introduction to the section of the Journal devoted to Art Loss in Iraq.


Art Loss in Itaq
— Editor
The following five articles address the crisis of art lost or endangered in Iraq as a result of recent military action. 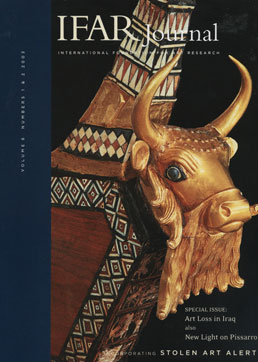