Publication
Long Island Con Man John Re Sentenced to 5 Years for Fraud that IFAR Helped Expose
— Lisa Duffy-Zeballos and Sharon Flescher
In a follow-up to their previous article published in IFAR Journal (Vol. 15, nos. 3&4), IFAR’s art research director and executive director update the case of John Re, who passed off dozens of counterfeit Pollock and de Kooning paintings bearing a fake “Schulte Collection” provenance. A large group of the fakes were submitted to IFAR’s Art Authentication Research Service. This article reports on the perpetrator’s sentencing and describes the important role that IFAR’s research played in the case against him.


Vienna 1900: Portraiture, Perception, Reception, and Restitution
— Alessandra Comini, Eric R. Kandel, Jane Kallir
The edited proceedings of an October 2014 IFAR Evening where an art historian, a gallerist, and a Nobel Prize-winning brain scientist spoke about early 20th century Viennese artists and their portraiture; the way that contemporaneous psychology and studies of the brain influenced these artists and their audience; and modern day Holocaust-era art restitution claims involving works by these artists.


Viennese Portraiture in the Age of Angst – Vienna 1900: Portraiture, Perception, Reception, and Restitution
— Alessandra Comini
In a heavily illustrated article, a University Distinguished Professor of Art History and Curator of “Egon Schiele: Portraits” discusses how the zeitgeist influenced the evolution of Viennese portraiture in the early 20th century and provides an overview of the major artists and their subjects – Gustave Klimt, Richard Gerstl, Oskar Kokoschka, Max Oppenheimer, and Egon Schiele.


Portraiture and the Beholder’s Share – Perspectives from the New Biological Science of Mind – Vienna 1900: Portraiture, Perception, Reception, and Restitution
— Eric R. Kandel
In a discussion illustrated with scientific diagrams, as well as artworks, a Nobel Laureate, brain scientist, and author examines how the new science of mind influenced the Viennese Expressionist painters and their audience, and how it continues to drive the relationships not only between artist and subject but between artist/art and viewer.


Egon Schiele – Reception and Restitution – Vienna 1900: Portraiture, Perception, Reception, and Restitution
— Jane Kallir
A gallerist, who is also author of the Egon Schiele catalogue raisonné, draws on personal family history and recent Holocaust-era art restitution cases to trace the exodus  of Viennese Expressionist works that were “saved from Europe” during the Nazi era and ended up in major museums and private collections in the U.S. and abroad.


News & Updates: Was Sotheby’s Negligent in Missing a “Caravaggio”? British Court Says “No”
— Lisa Duffy-Zeballos, Ann-Margret Gidley, and Sharon Flescher
A discussion of an unsuccessful British lawsuit against Sotheby’s wherein a consignor sued the auction house for selling his painting as by a “Follower of Caravaggio” that a specialist later authenticated as by Caravaggio himself, although others disagree. The article delves into the state of Caravaggio scholarship as well as the court’s ruling as to the auction house’s duty to its consignor to render a considered opinion regarding attribution.


News & Updates: Authenticity Suit Against Haring Foundation Dismissed; Appeal Filed
— Sharon Flescher and Ann-Margret Gidley
Coverage of a lawsuit brought in a federal district court in New York by owners of a large group of artworks purportedly by Keith Haring against the artist’s eponymous foundation for denying the authenticity of those works. The court rejected the plaintiffs’ anti-trust allegations. They subsequently filed an appeal.


News & Updates: Rulings in Two Restitution Battles for Contested Pissarros
— Nicholas Dietz and Sharon Flescher
Updates on two cases reported on previously in IFAR Journal – Cassirer v. Thyssen-Bornemisza Collection Foundation and Meyer v. University of Oklahoma. In the first story, a California district court dismissed a long-running Holocaust-related claim against a museum in Spain for a Pissarro painting and ruled in favor of the museum. In the second case, a New York district court ordered a Nazi-era ownership claim for a painting in the collection of the University of Oklahoma transferred to a district court in Oklahoma. Meanwhile, the Oklahoma House of Representatives passed a resolution directing provenance research and other procedures leading to the resolution of Nazi-era claims.


News & Updates: NY Court Dismisses Suit Against Bavaria Over Picasso Portrait; Appeal Pending
— Nicholas Dietz and Sharon Flescher
A summary of the dismissal by a federal district court in New York of a lawsuit brought by the heirs of Paul von Mendelssohn-Bartholdy against the Free State of Bavaria over ownership of Picasso’s Madame Soler, allegedly sold under duress during the Nazi era and now in a museum in Munich. The court rejected the plaintiffs assertions that circumstances at the time of sale allowed the case to go forward in the U.S. under an exception to the Foreign Sovereign Immunities Act.


News & Updates: Artists Resale Royalties Back in the News: Appellate Decision in California Keeps Statute Alive – In Part; Federal Law Proposed – For Third Time
— Ann-Margret Gidley and Sharon Flescher
In an update on a case reported on previously in IFAR Journal, the authors discuss the May 2015 decision of the Ninth Circuit Court of Appeals that revived the California Resale Royalties Act (CRRA) while limiting its applicability to California sales. Meanwhile, bills proposing a national resale royalty are introduced in both houses of the U.S. Congress.


News & Updates: Cambodia Postscript
— Ann-Margret Gidley and Sharon Flescher
Discussion of the Cleveland Museum’s decision to return a statue of Hanuman, the Hindu monkey god, to Cambodia to join several other sculptures found in the U.S. that had been stolen from a Cambodian temple complex and later returned to Cambodia, all of which was covered in the IFAR Journal. 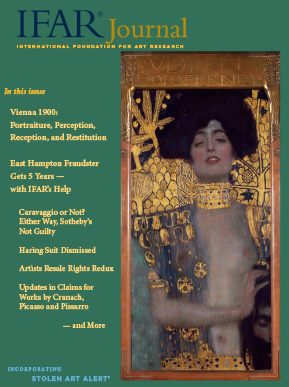